Ferrari Hypercar With Cyberpunk 2077 Styling Is a Dystopian-Approved Rendering

The movie also greatly resonated to automotive aficionados, thanks to the use of a gorgeous 1959 Chevrolet Corvette.

Well, the historically relevant example of “America’s sports car” will be making a splash once more in 2021, as it’s being prepared for sale by its consigners, Eyes on Classics. And this Corvette truly has an amazing background story.

According to available information - check out a recent interview (embedded below) with Paul Smith, owner of the 1959 Corvette that starred in “Animal House” - this Chevy was purchased back in 1975 from a Eugene, Oregon dealer and then loaned three years later to Universal Studios for the production of the cult classic.

After starring alongside John Belushi, Karen Allen, Kevin Bacon, or Donald Sutherland, it was returned to the possession of the rightful owner. Sadly, it has been gathering dust in his garage ever since. That’s a barn find in its own right.

Anyways, Smith has decided now is the right time to part ways with the ‘Vette after the car hasn’t been driven for years; the consigners even claim its interior has been “untouched since the movie in 1978.” As far as we’re concerned, this Chevy clearly needs a bit of TLC, as one can obviously see it will require a fresh coat of paint, along with some mechanical and cosmetical attention.

Still, because it was kept safely inside the garage, it’s not going to take a lot of work for the 1959 Chevy Corvette to return to its former glory and earn its rightful place among other precious collectibles. We could even imagine this first generation as a great addition to a place like the National Corvette Museum, but we’ll probably just going to have patience and see how this pans out in the months to come. 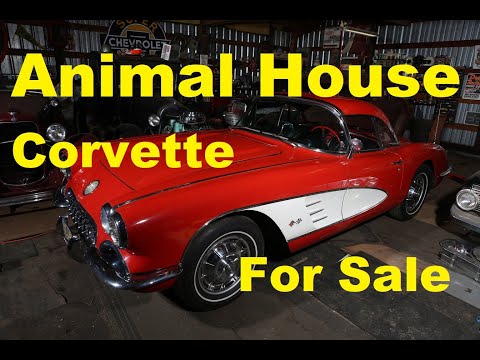