4 This Pontiac Star Chief Safari Once Moved a Kingston Trio Member, Now It Can Move You

5 Abandoned 1958 Pontiac Chieftain Has Been Sitting for 40 Years, Engine Refuses to Die
Up Next

Sebastian Toma
If just left to the will of nature, vehicles will degrade to a certain extent where they may be too far gone to repair. Some people try to “save” those vehicles regardless, and the process is costly. In many cases, the price far exceeds the value of the vehicle and it might even exceed the value of it if the owner decides to sell it after completing the restoration.
9 photos

Many car enthusiasts go through this dilemma every year, whenever they spot an abandoned vehicle and consider buying and fixing it back to its former glory. In the case of Shawn from Cleveland, Tennessee, he saw a 1955 Pontiac that was just sitting in a field owned by one of his friends.

Instead of attempting a full restoration to a vehicle that had a seized engine, broken transmission, had various components rusted out, and also lacked numerous chromed trim elements, Shawn decided to go in a different direction for this 1955 Pontiac Chieftain two-door hardtop.

Since the vehicle was lying in a field in Tennessee for too many years to count, its chassis had dropped out when it was lowered from the flatbed trailer because it had rusted away.

As it turns out, Shawn has found that the 2000 Chevy S10 pick-up truck has a wheelbase and track that are similar to this model Pontiac, so all he had to do was to find a suitable donor. The next part of the plan involved a lift, fitting massive tires, and getting it all running.

Due to the relatively modern donor car, this model has a running air conditioning system, as well as cruise control, and can cruise on the highway at speeds of 80 mph (ca. 129 kph) without running into any issues.

The restomod was a family affair, as Shawn worked with his wife and their son on this project. The initial plan was to complete the build within a year, and they managed to do it despite doing all the work themselves. Moreover, it even comes with hand-painted lettering on its sides, which is a nice touch.

As the owner notes, this build does not attract hate from anyone, as it is clear that the other options were to just leave the vehicle in a field or take it straight to the crusher. The entire project cost $5,000 to build, according to its owner, which is low for such a complicated build that resulted in a unique vehicle. 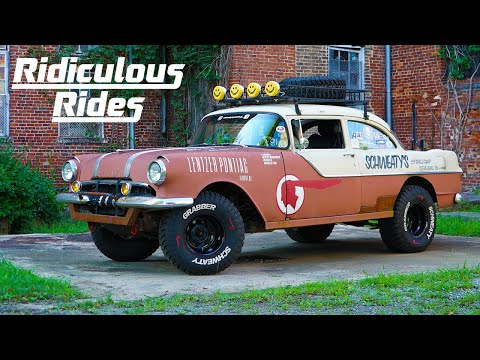