1955 Chevy 3100 Stepside Was in Furry Rough Shape, Turns Orange Marvel in a Year

Aurel Niculescu
Chevrolet’s Advance-Design light and medium-duty trucks came almost immediately after the war (1947) as the company’s first major redesign of the pickup series. So, even a final model year like this 1955 Chevy 3100 (a half-ton) Stepside is without a doubt a “little” old. But, judging by its wonderous orange appearance, one wouldn’t say it’s 66 years of age, right?
35 photos

Of course, the pickup truck didn’t start its most recent lease of life in such a pristine condition. According to the good folks over at the Hand Built Cars channel on YouTube, the 3100 Stepside arrived at the Ol’ School Garage, a little aftermarket shop based in Hillcrest, Queensland, Australia looking rather easy. And not like the full restoration project it turned out to be in the end. But, of course, we all know that with these old trucks a lot of times appearances can be entirely deceiving.

So, even though its sandy looks suggested this would be a quick custom paintjob, the owner actually knew there’s a lot more work to be done. As such, the Chevrolet was dropped off to find the underlying cause of evil, aka for a bare metal restoration. Even so, only after the finished media blast was the entire extent of the damage truly revealed. As such, there was no other way than to replace some of the affected panels and extend the period of tinkering to almost a full year.

It was time well spent, judging by the build showcase in the video embedded below, with the doors, guards, and tailgate going to the junkyard. The replacement panels were painstakingly fitted to rival what contemporary factories achieve with help from the latest technologies, while the bed’s wooden tray floor was completely renewed with fresh timber.

Of course, reworking the exterior with a custom House of Kolor orange pearl wasn’t enough to complete the looks, especially since the interior was a bit furry (quite literally, check gallery for more) to begin with. Thus, a full interior retrim was also in order, complete with a lot of creature comforts to make the 3100 a great daily driver. There’s just one regret – we have no idea if the engine was also caressed by the builders... and there’s also no sound sample included with the footage. 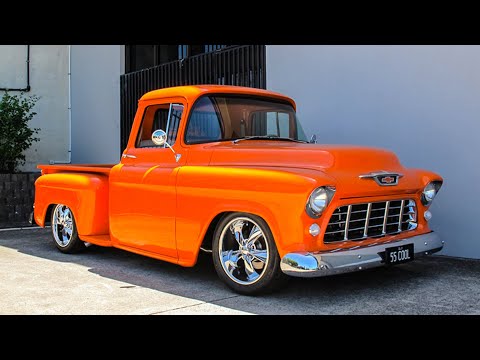