For some people, nothing seems to be as exciting as the image of a pickup truck with a Harley-Davidson as its sidekick. They get so hyped-up about them, it seems, that they don’t shy away from paying tens of thousands of dollars for a pair.
24 photos

What you see in the gallery of this piece is officially titled a Ford F-1. It comes in the beat-down form of your regular rat rod, with the worked body - custom-fabricated grille, floor pans, and transmission tunnel - showing all the signs of the breed: rust, corrosion, and even faded brown and green paint to help it send the message across.

As with any builds of its type, this one too is not exactly a Ford. It is, in fact, more of a Chevy, as some of the most important bits are sourced from the bowtie carmaker: the frame comes from an S-10, and the engine, tied to a four-speed automatic, is a 5.3-liter V8 Vortec of GM make.

As with most other rat rods, the interior is a complete opposite of the exterior. We have bucket seats in black leather with white piping, the same material is used on the door panels and bulkhead lining, and all the modern-day tech one needs is there: cruise control, backup camera, and air conditioning.

But the biggest surprise can be found in the bed of the truck. There lies a Harley-Davidson Hummer of unknown model year (the bike was in production between 1955 and 1959) that, even if it’s not in working order, still makes the truck even more interesting.

With all this hardware to back him up, and some cool photos of this incredible duo (see them all in the gallery above), the seller had no problem in snatching $46,000 for them just a few days ago. We don’t know who bought it, but as often is the case with such builds, we do expect it to see it again on the auction block at some event in the near future. 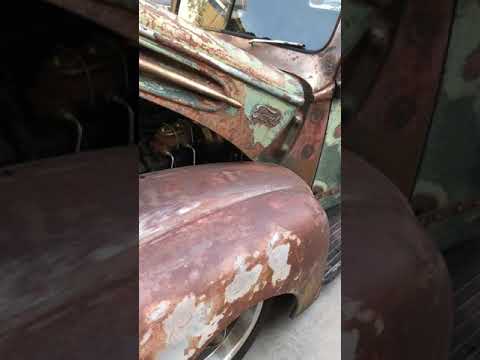