There is no carmaker out there with as much influence over the custom industry as Ford. The Blue Oval has been making cars pretty much since cars were invented, and that in itself isn’t spectacular. What is amazing is the fact that, unlike the products the competition had to offer back in the early days of the industry, its cars are much more present in certain segments.
15 photos

Although not limited to Ford, the hot rod and rat rod builders of today do seem to have a soft spot for the Blue Oval machines of old. We talked about many such creations in January, as part of the Ford Month here at autoevolution, but there are so many other builds out there we’ll probably keep bringing them under the spotlight for a long time.

This February, we’re celebrating Truck Month, and there’s no shortage of hot or rat rods in this segment either. For today, we dug up something titled 1939 Ford F1 Rat Rod, presently sitting on the lot of cars being sold by Gateway Classic Cars.

Technically, this is a Ford the likes of which were made between 1937 and 1940. Some of the original design can still be seen at the front, where the grille and headlights are reminiscent of the Blue Oval it is based on. Behind that grille, and exposed the elements, sits a flathead V8 engine, rebuilt and tied to an equally remade transmission.

The cab, resembling that of a later F-1 pickup, comes right after the engine, looking all decrepit, as it should on a rat rod, and holding a spartan interior. Like all the rest of the project, it was lowered over a custom chassis.

Sporting other changes too, like upgraded suspension and braking, the 1939 Ford for is looking for a new owner, one willing to pay $24,000 for it. 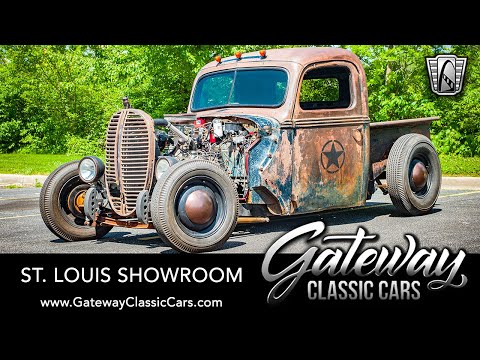