4 The Most Iconic Hot Rod Ever Is Up for Grabs

5 Ford Roadster Hot Rod That Elvis Presley Couldn’t Have Is Up for Grabs
Car video reviews:
Up Next

If you’re a fan of golden things and pre-war hot rods, there aren’t many objects that can bring you gratification in both departments at the same time. Until you get a glimpse of this 1927 Ford Model T, that is.
36 photos

Forget the glimpse, actually, because if you enjoy at least one of the previously mentioned items you will get a mouthful from the ‘Gold Brick’ no matter how you look at it. Firstly, we’re talking about a hot rod with exaggerated proportions and secondly, it has a golden hue on everything, including the seats and the steering wheel.

Starting life as a Ford Model T Coupe from back in 1927 – smack in the middle of the Prohibition Era and bootlegging – the Gold Brick became what it is today sometime in the 2000s, mostly thanks to a man named Bob “Bleed” Merkt.

Well-known and respected in the hot rod community, Merkt first got its working gloves alongside Jesse James at the Austin Speed Shop before moving on and starting Midwest Fabrication in his home Wisconsin, where the Gold Brick was built.

Apart from the extensive gold accents all around and inside the car, the hot rod sports a look not unlike the bootlegging Fords of old, despite the Model T Coupe from ‘27 not being the most used base for such a build in the industry.

You can imagine the amount of measuring, chopping and welding that needed to be done before the car started to resemble what it is today.

White, the occasional red and the amber gear shifter are the only non-golden colors that complete what now looks like Austin Powers’ Goldmember ride if he lived in the 1930s and casually indulged in smuggling Moonshine from time to time.

Like many other Ford hot rods from its era, the car is powered by a Chevrolet engine, a small-block 283 tri-power V8 mated to a 3-speed manual transmission. Three two-barrel Rochester carburetors sit proudly atop an Edelbrock intake manifold, making for a truly old-school look for the exposed engine.

The stripped-out hot rod is currently for sale at Garage Kept Motors for a rather reasonable $23,900, especially considering the amount of work it must have taken to be completed. 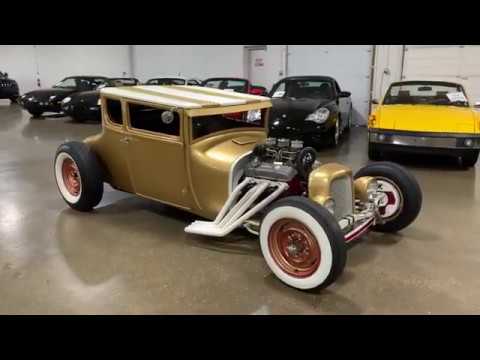