Aurel Niculescu
In a world that has seemingly killed off soccer mom jokes because minivans have become a thing of the past, there’s the occasional high-performance station wagon to prove that crossovers, SUVs, and trucks are not everything in life just yet. Actually, with the C8-generation of the Audi RS6, there’s nothing occasional about it – not even the Avant’s station wagon body.
50 photos

The Ingolstadt-based automaker first outed an RS (RennSport – meaning racing sport in German) version of the ubiquitous A6 business sedan almost two decades ago, back in 2002. And, if memory serves us right, Audi initially premiered the flagship high-performance version of the C5/Typ 4B generation in Avant form - quickly followed by the executive limo version.

According to Audi aficionado folklore, Autobahn-using owners soon found out that engineers fitted a rather forgiving limiter, so maximum speeds of around 270 kph (almost 168 mph) were not uncommon.

Jump forward to the current C8/Typ 5G iteration, and we don’t need to rely on myths for checking out the top speed of the RS6 Avant enabled by the 4.0-liter V8 TFSI mill and its mild hybrid 48V setup. That’s because the AutoTopNL channel on YouTube found a particularly deserted stretch of the Autobahn and went for maximum (speed) glory.

According to the official figures, the 600 ps (591 hp) “family hauler” is capable of sprinting to 62 mph (100 kph) in 3.6 seconds and to 124 mph (200 kph) in just 12 seconds. We’re going to trust them on that because the initial acceleration test from a standstill doesn’t care about those figures and didn’t stop until hitting 300 kph (186 mph) - and that was because of some light traffic.

On the second top speed run (starting at the 1:30 mark), the RS6 Avant managed to achieve 305 kph (189 mph), as promised by the company when the customer chooses the Dynamic package plus from the options list. 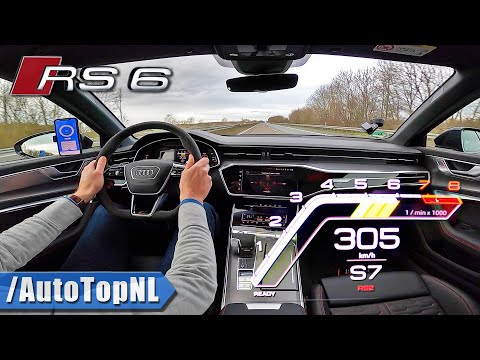