1,800-Horsepower C7 Corvette Will Terrorize Your Nightmares and Inspire Your Dreams

Home > News > Tuning
Stephen Rivers
Typically on TRC we just get insane videos of insanely fast cars that look and sound cool. This time though we get a deep dive into what makes this 1,800 horsepower C7 Corvette the absolute monster that it is. Oh, we get video of it looking and sounding cool, too.
6 photos

Matt Kavanah isn't your typical car guy. He's what happens when a passion becomes a bit of an obsession, and one has the resources to realize their dreams. Of course, for many, this particular dream might be a nightmare waiting to happen.

That's because Matt's dream is a usable, albeit dangerously fast 1,800-horsepower C7 Corvette. To make it that powerful he had a lot of work to do. He started out with a Borowski Dart LS block, then he dropped a serious set of internals inside.

Outside of the engine is a Presicion ProMod 94mm turbocharger. To put that into context, imagine sliding a turbocharger as far around as a dinner plate and as wide as a shoebox into your engine bay. It's actually a bit bigger than that.

To handle the boost, Kavanah uses Motec engine management. He says that it does produce a little lag (no duh) but the rolling anti-lag (yeah, it's got that too) keeps it ready to go once you're on the highway.

Fun fact, he's planning to send the turbo back to have it upgraded for an upcoming race. We're not totally sure why it needs it, even after listening to him tell us, because at 40psi, this thing is making 1,800 horsepower to the crank and 1,600 to the wheels.

To manage the power and get it to the wheels quickly and effectively, the Corvette also has a six-speed sequential gearbox. In the video we see it easily run 10-second drag racing passes.

He loves the transmission too. The car started out as a seven-speed manual but after that broke, Matt needed a replacement. To go as fast as he wanted to go, the three-pedal setup wouldn't work. He also mentions that he knows an auto would be faster, but he wants to be more engaged too. We understand that after watching this thing spit flames out of its hood.

Watching and listening to it as it spools up to full boost sort of doesn't seem real. It's almost ethereal. It's just so different from any other Corvette on the road.

The in-car video during full-throttle driving is hilarious. The passenger can barely keep the camera straight. The water-to-air intercooler reservoir mounted behind the passengers spits little droplets of water out between shifts.
That's right... it's so fast that it pees itself a little every time it starts to go even faster...

The engine bellows smoke on each change too. There's nothing about it that feels any less than hilariously overbuilt. Now we just hope that at some point Matt will treat the new C8 to the same sort of attention. 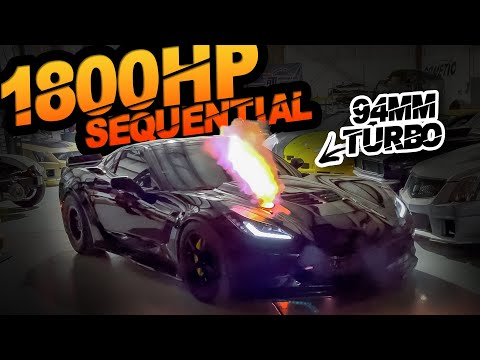