3 3,000 HP Quad-Turbo Nissan Patrol In Dubai Is The Sleeper SUV from Hell

A giant 176.5 meters by 225 meters desert falcon made of metal was spotted for a brief period of time at the Dubai Rugby 7s stadium on October 23. Its wings, body and head were all made of moving Nissan Patrol cars.
9 photos

Ever since the Dubai police sanctioned the synchronized car dance earlier this year, with 143 vehicles of all makes creating a moving smiley face, there was a new Guinness World Record to beat: the Largest Synchronized Car Dance.

And beaten it was this October when a total of 180 cars, this time all the same make – Nissan Patrol – came together to create the shape of the falcon we mentioned earlier.

The synchronized drive was recognized by Guinness as the new record for this category. The procession of SUVs drove in opposite directions around the outline of a falcon in two concentric lines. Led by racing driver Axcil Jefferies, the armada covered a total distance of 1,476 meters.

All the other drivers in the convoy were Nissan employees, very happy to be part of this, as you can see in the video attached below.

“It was a great privilege to give our employees the opportunity to take part in this landmark achievement," said in a statement Juergen Schmitz, managing director of Nissan Middle East.

“We were so pleased by the enthusiasm displayed by everyone, and single-minded determination they demonstrated towards achieving this goal.”

This is not the first time the Patrol SUV makes it into the Guinness Book of World Records in the region.

In 2015, a Patrol was crowned the car with the fastest ascent of a 100-meter sand dune, with a time of 4.9 seconds. Two years before that, in 2013, a Patrol towed the world's heaviest aircraft, a fully loaded, 170 tons Ilyushin Il-76 cargo plane, for a distance of 164 feet (50 meters) at Sharjah International Airport in the UAE. 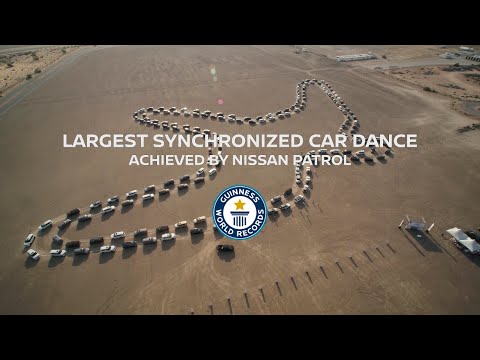