2 Mercedes and Scania Trucks Have the Strangest Drag Race Ever

4 The Nikola One Trevor Milton Designed in His Basement, Maybe Bought from Rimac

For a regular driver, being in control of an 18-wheeler must seem like a huge challenge and an even greater responsibility. One false move and the Joneses' minivan that was driving next to the big rig is no more, Joneses included.
1 photo
And that's just the apparently simple task of cruising down a highway. We won't even go into entering a city or, God forbid, doing a reverse parking maneuver with the trailer attached. Obviously, anyone who understands the basic concepts of driving could, with practice, master the art of controlling an 18-wheeler, at least to some degree, but for someone who's driven a hatchback all their life, it must seem like something from another world.

Well, as is the case with almost any other activity, you can't make an omelet without breaking a few eggs. You can't expect to reach the level of skill shown by this guy who reversed his rig into an impossibly tight spot without making a few mistakes along the way. The question now is how big will those mistakes be? Will the Joneses make it through?

Let's just say it all comes down to a few things such as inbred aptitude, concentration, dedication, and, perhaps above all, luck. We can't comment on any of the other requirements listed here as far as the driver in the clip below is concerned, but we can say without fear of mistaking that his lucky star shines brighter than almost anyone else's.

Thanks to the person filming this, we know the mishap takes place on the Old State Highway 63 in Tennessee, even though the location itself is pretty irrelevant. We're pretty sure you can find plenty of similar roads and similar bridges all across the U.S. The road itself is perfectly fine for passenger car and light truck use, but it does seem to be a little too narrow for a semi and its trailer. Not to the point where it couldn't use it, but navigating it safely would require a bit more patience and focus.

Our driver seems to lack both these qualities, as well as some basic driving skill, approaching a bridge crossing at a much too tight angle and with way too much speed. Not only is there's no shame in slowing down to make certain maneuvers in an 18-wheeler, but it's actually the right way to do it.

After completely misjudging their approach, this driver shows their complete lack of awareness by continuing to drive forward even after the rear wheels of the trailer hit the side of the bridge, then climb over its wall. In total, there were at least two clear opportunities for the trailer to capsize either side of the bridge, but somehow the rig not only escapes in one piece but is also seemingly able to continue on its way. Hopefully, the driver learned their lesson. Either that or they decided to consider a different career. 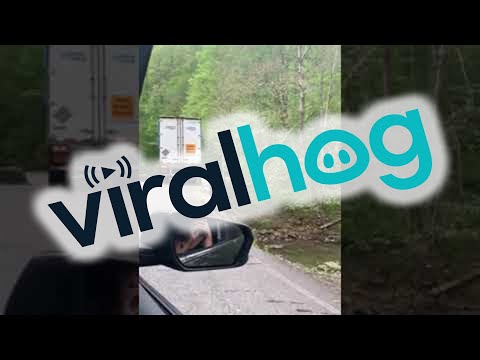