1 The Rarest Shelby Cobra 427 Ever Built Goes Out for a Spin, Flexes Angry V8

2022 Tesla Model Y Has Limited Upgrades, but Is Still Ahead of the Pack

1,500-Pound-Feet Cobra MkIII Has No Engine Noises, Still a Killer Hoot to Drive

So, from where should we approach this one? Should we feel outraged that a Cobra has a motor instead of an engine? Or agree that Carroll Shelby’s visionary ideas are just being taken another step forward?
47 photos

Well, do remember that AC Cars has revealed for more than a year plans to create Cobras with zero emissions. And now it seems that EVs that only look like car dinosaurs and do not sound like one are going to be produced in America as well, courtesy of Superformance.

Right now, Shawn Davis – the affable, knowledgeable, and deeply passionate about muscle cars host of the AutotopiaLA channel on YouTube – has only experienced the will and might of an MkIII Roadster prototype. Which has been created by Superformance with help from Florida’s Gotech Performance, a company that has stuffed the motor of a Tesla P100D in the back and lots of “gigantic cellphone batteries” under the hood. Right in the place where a Roush 427ci V8 should have been.

And believe it or not, it’s still around 100 lbs. (45kg) lighter than your typical ICE-powered Cobra beast. Now, anyone who needs a defibrillator should know it can be plugged in the car (they’re joking... probably). And Shawn was shocked yet amped to drive it. Also scared, for sure, knowing what happened at the 10:49 mark.

Anyway, do go through all the chapters because this is one novel experience. Complete with traditional/modern interior (5:13) and lots of good fun – in between rounds of head-ripping acceleration. So, it has engine noises at the 6:57 mark after the drive started – they're courtesy of the camera team! Then there’s also Shawn finishing his learning curve. And a fitting roaring Mustang conclusion at the very end of the video embedded below. 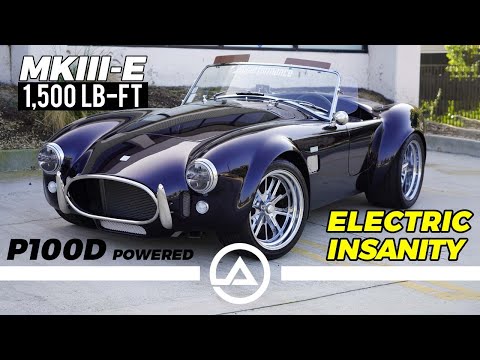