$1.5 Million Koenigsegg Agera R Uses Umbrellas as Roof After Losing Its Own

Gabriel Nica
Koenigsegg is in the business of building some of the exquisite, fast and ludicrous cars on the planet. As a matter of fact, I’d even go as far as to claim that they must be the kings of speed these days, no matter how hard others are trying to stop them.
1 photo
I won’t go into details regarding what I mean by that but I’ll just say that it doesn’t feel like a total coincidence that the new speed limits enforced on the Nurburgring had been applied right before Koenigsegg had the chance to put their fastest creation yet to the test on it.

Leaving all that to the conspiracy theorists out there, let’s try and relax for a moment with a funny accident that took place recently on the streets of Monaco. That’s one of the places where you get to see such exotic creations and the Koenigsegg Agera R is definitely one rare sight to behold.

The Swedish manufacturer built this hypercar wanting to show the world that there are other options out there other than the Bugatti Veyron when it comes to incredible speeds. Unfortunately, they never got to claim the title of the fastest car in the world but the Agera is one heck of a fast ride no matter how you look at it.

Expensive too. The starting price for one was $1.5 million back in the day but since then, it went out of production and, as is the case nowadays, being such an exclusive product, you’ll probably have to pay more to get one, no matter if it’s second hand or not.

Therefore, you’d imagine that the owner could afford a replacement roof for his car, without having to resort to an improvised one made out of umbrellas right? Well, he probably does but, according to the uploader, earlier during that day, he did some trial runs around town and due to the car’s power, he lost the roof altogether, getting blown off.

Since getting a new one is not as easy as buying a can of soda, the man had to improvise until Koenigsegg delivered his new roof. Hence, this showed up on Youtube. Let’s just hope the owner has a sense of humor because this is definitely a funny sight! 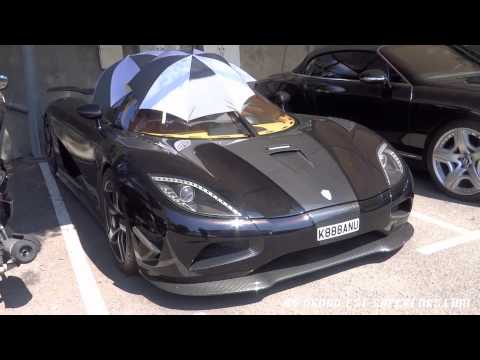