1 1,400-HP Hoonicorn Is Coming Back Stronger, It's Ken Block vs the World

Some 10 years ago, I did my first ever podcast with a local pro drifter that was driving a Nissan S14 at the time. These days, he is still driving, but his main focus shifted towards his 14-year-old daughter. With her father's guidance, she won an International Drifting Challenge, proving that kids are the future of motorsport.
14 photos

That being said, Ken Block's most recent move shouldn't come as a shock. After a successful first season of "Hoonicorn vs the World" in 2020, the team at Hoonigan decided to spice things up a little. We've known that season two of the series was coming for a while now, but there was no evidence that Mr. Block would not be driving. But if you think of it, his agenda may be pretty full with his recent Audi contract.

Last year, a lot of people complained that the Hoonicorn started with a rather unfair horsepower advantage. On several occasions, it was going up against cars that had half of its power. And so, Hoonigan decided to start season 2 with a bang! This time, the Hoonicorn Mustang will be going up against a 4,000-hp Corvette C6. Yes, that's a genuine NHRA vehicle. Just by looking at it, you get a feeling that Block's car might just get obliterated today.

But we know better than to make predictions before knowing all the details. The Corvette's running a 526 ci (8.6-liters) Screw Blown Hemi engine that puts out twice as much horsepower as a Rimac Nevera. It uses a 3-speed Lenco transmission that sends that power to the rear wheels, and it weighs in at 2,800 lbs (1,270 kg). The Hoonicorn is some 200 lbs (90 kg) heavier, and its twin-turbo Nascar V8 only churns out 1,400-hp. While it has a 6-speed Paddle Shift gearbox, we shouldn't forget this is an AWD monster.

You might have seen Alex Laughlin's Corvette before, even if you aren't actively following the NHRA series. Hot Wheels released a diecast replica of this car as part of the Boulevard series, alongside four other fast cars. In case you find it difficult to comprehend how fast this car is, perhaps you'd like to know that it can run the 1/8-mile (201 meters) in 3.5 seconds, with a trap speed of 212 mph (341 kph).

Alex will be going up against Lia Block, Ken's 14-year old daughter. She's gone through an extensive training program over the past few months. With AWD on her side, will she be able to keep up with the NHRA Goliath? Pre-race predictions seem to favor her, as the Corvette is bound to struggle with traction issues on the no-prep surface. For the first run, the two drivers will be going head-to-head down a 500 ft (152 meters) stretch of tarmac.

Lia launches a fraction of a second early, although she is off to an impeccable start otherwise. By the time the Corvette hooks up, she is already across the finish line. For the second attempt, Alex asks permission to use a special kind of traction compound. This time, it's a much more balanced fight, but it doesn't take long for the Corvette to start pulling ahead. It wins this run by a small margin, thus evening the scales.

For the last run, we get to see a propper 1,000 ft (304 meters) head-to-head race. At this point, you would just expect Lia to be left behind. But she is once again off to an amazing start. And by the end of it all, she wins the challenge by about 3 car lengths. At this point, she will likely be doing the driving in the future episodes as well, and we do get a glimpse of what cars are coming up next. 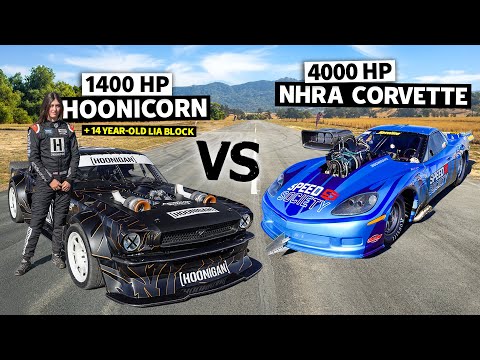