We have seen quite a few tuning specialists thinking that releasing a few pictures and a product description page are enought to get their enhancements noticed. Others like to go the extra mile and prepare something special. Or rather, as is the case with exhaust specialist AWE, they’re going down the flying quarter-mile route.
17 photos

That’s more than enough, since these folks are actually promoting a new product that hasn’t even been released yet, so this is more like a teaser than anything else. Of course, it was easy for AWE to come up with the idea for their upcoming carbon fiber intake upgrade dedicated to the A90 Toyota GR Supra.

That’s because the company has its own vlogging series that sees various vehicles go down a closed course to establish flying quarter-mile supremacy. The latest entry in the contest is a 2020 A90 Toyota GR Supra Launch Edition. It’s not the first Supra they have tested, though, so they already have a pretty reliable 127-mph (204 kph) benchmark.

This is a pretty unassuming little contest because AWE doesn't use special equipment for professional measurements. Naturally, it doesn’t rank the vehicles it tests based on the time needed to complete the quarter-mile run, using the odometer’s official readout instead.

Still, this is no ordinary Supra we’re dealing with because AWE has worked its magic exhaust tricks on it. That means the A90 packs the non-resonated Touring Edition of the company’s tailored exhaust suite. It’s a no-frills bolt-on assembly with a straight-through design that adds another 6 horsepower and 8 lb-ft (11 Nm) of twist at the wheels.

Better yet, the GR Supra also features a third-party stage one tune (no details about its performance gains are mentioned in the video embedded below). It also serves as the appetizer for AWE’s upcoming carbon fiber intake, which is currently in the research and development phase.

Suffice to say, these little upgrades make a difference compared to the first Supra they tested, as the flying quarter-mile is completed at a trap speed of 132 mph (over 212 kph). If you’re curious, we’ve also included a shot with the general standings of AWE’s little contest in the gallery. 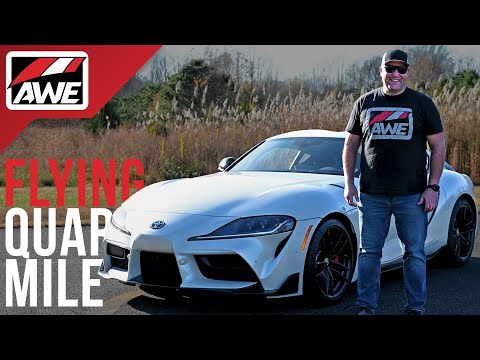