5 For $422K, Your Audi R8 LMS GT2 Color Edition Can Come in an Individual Shade
Car video reviews:
Up Next

This may have not been the case 30 or 40 years ago, but I've often seen ladies competing in various forms of motorsports over the past decade. And most of the time they're quite skilled and can easily keep up with the men, at least if their cars are prepared accordingly. But at the end of the day, you have to ask yourself, how many moms do you know that can run low 8-second runs at the drag strip?
14 photos

If I'm not mistaken, the fastest woman competing in the NHRA has got to be Brittany Force. She's into Funny Car Dragsters, and I've even seen her get sub-4-second runs, with a trap speed of 338 mph (544 kph). Now, the Audi R8 we're looking at today is nowhere near as fast as that, but it's still impressive nonetheless. It's still running a stock motor, but it does come with a host of mods that allow it to achieve under 9-second runs over the quarter-mile (402 meters).

The twin-turbo kit on this V10-powered R8 comes from AMS Performance, and for $26,750, it's capable of delivering anywhere between 800 to 1,600 horsepower, depending on what other upgrades are featured on the application. Additionally, a Sheepey Race intake manifold is installed, and that comes at a hefty price as well, as it's a billet upgrade. This part alone will set you back $15,000.

There's also a Motec ECU in place, providing all the computing work, and of course, the transmission on this thing has been upgraded by Sheperd Transmissions, an Ohio-based company. The driver is Amie Palo, from Texas, and her husband Tony used to drive this before she did. But coming to the track ever so often, she decided to have a go herself. And seeing that her children have done some growing up, she is now free to let it rip down the quarter-mile.

We get to see her doing multiple runs at the track in an attempt to break the record for the fastest stock motor Audi R8. I must say that I can't remember the last time I've seen an R8 going that fast! The first recorded run shows her doing an 8.48-second pass, with a trap speed of 168.89 mph (271.80 kph)! Later on, she does an 8.46-second pass, as she wins against a very impressive-looking Nissan GT-R.

Her goal for this event was to break the 8.23-second world record, as she plans to take things even further with the car and get a fully-built engine in it. That means she will be attempting to do a sub-8-seconds run not long from now, and it will be interesting to see how far she can push this R8. Throughout the event, she continues to do run after run, and progress is starting to be visible.

After improving her initial time by just a bit, doing an 8.43-second pass, she takes it up a notch and manages to pull off an 8.279. The engine seems to be close to its limit, at least when kept in parameters that won't be harmful to it, and some tweaks were done to the transmission to provide a better result. And it didn't take long for Amie to put in a solid run, which was clocked at 8.23 seconds and 170.04 mph (273.65 kph)! There was some confusion regarding the R8 stock motor world record at first, but in the end, it seems that Amie did manage to break it! 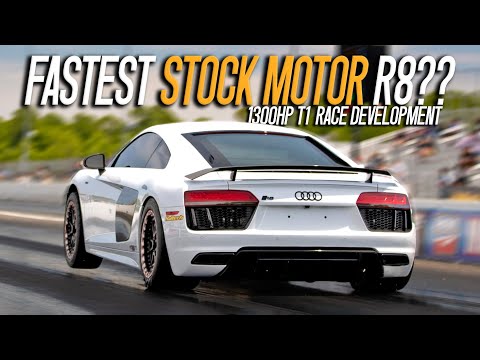