3 2021 Ram TRX "Brodozer" Gets Driven Hard on and off Road, Receives Mixed Ratings

Dragos Chitulescu
Every now and then, you stumble across a vehicle that makes you reconsider all of your previous choices. I was a big Ford F-series fan until now, but this 1971 Chevrolet K20 has a certain "je ne sais quoi" that makes me want one badly. Maybe it's because I'm a big fan of the Bumblebee yellow look, or perhaps it's the simplicity of it all, and the "Heartbeat of America" jingle that has me hooked.
95 photos

Here's a fun game for you. Since the VIN number is provided, you should try decoding it to see what you get. You'll have to be a bit of digging though, because this is a pre-1981 vehicle, and it is slightly shorter than a newer vehicle. Since this truck was advertised as a C/20 but with 4WD, we wanted to be sure if it's really a K20 or not. This method apparently works for Chevy trucks produced between 1967 to 1972.

The VIN is KE241F617332PK. With K being the first letter, this proves that the truck is indeed a K20 4x4 model. The E shows that this was a gas-powered V8 from the factory. Next up, 2 is proof that this is a 3/4 ton (680 kg) truck. Then we have a 4, which means this is a pickup with a cab and bed. The next digit shows us the model year, and 1 is a representation for 1971. We also get to see where this truck was assembled: in Flint, Michigan.

I guess one of the main reasons this truck looks so clean is that it was completely restored with a frame-off restoration just a few months ago. It was also apparently fitted with a 396 CID (6.47 liters) V8, 4-Barrel motor and a Turbo 400 Automatic Transmission. Since it was restored it has only been driven for 127 miles (204 km), so this probably feels like a brand new truck.

There were three different variants of this engine that were made, with horsepower levels varying between 325 to 425, with the latter being listed as a Corvette option. While we don't know exactly which of these engines was fitted to this K20, we do know it does rely on fuel injection, which brings a modern, restomod twist to the whole thing.

This vehicle hasn't been listed as sold, but the seller does note the fact that it may not be on the showroom floor anymore. If you've got $85,000 to spare, and are in the market for a slightly bigger truck, you might want to call the people over at Gateway Classic Cars and see what happened to this 1971 Chevrolet K20. It's not by any means cheap, but still nothing short of spectacular to look at and probably to drive as well. 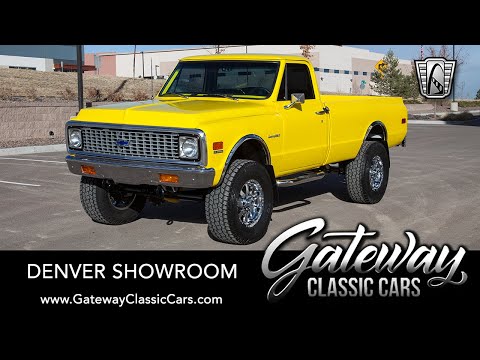