4 VW Bus Can Be Mean

Home > News > Tuning
Ciprian Florea
There’s something about overly powerful trucks today. First we had the 1,000 HP Li’l Red Express, and now we stumbled across this 1,200 HP Ford Lightning that showed off at the recent 2013 HPT Shootout in Houston.
1 photo
But we’re not complaining. We like pickup trucks... and we like beefed up pickup truck even better. In case the Dodge we showed you earlier today seems ludicrous, this SVT Ford Lightning comes with about 200 more horses under its bonnet.

Although it still has a 5.4-liter V8 engine, the truck is far off from being powered by the stock amount of 360 HP and 440 ft-lb of torque. Thanks to a Precision Industries-built turbo, this candy red beast can send a whooping 1,200 HP to the track at 30 pounds of boost for 144 MPH at the end of the quarter mile run.

According to its owner, the engine was set for “only” 950 HP and 22 pounds of boost when this run was filmed, but that didn’t stop the truck from running a 9.81-second quarter mile. Holy cow! 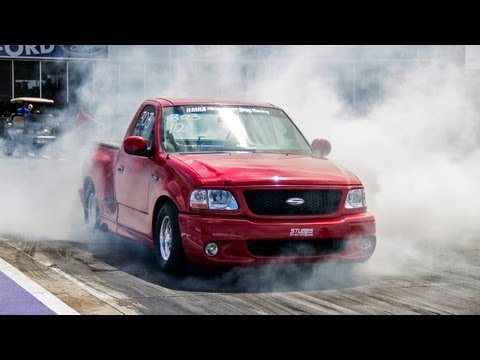