Boy, there's something you don't see every day. I mean, modified Escalades usually have oversized wheels and chromed grilles, while the go-fast stuff is left to the Nissan SUV crowd in the Middle East. But with at least 1,200 horsepower, this is one Cadillac that needs to be feared.
4 photos

The car, known as LSXcalade, also has a nice story behind it. The young gun behind the wheel got this as a hand-me-down from his father, who used it as a daily driver. The Escalade used to have a LSA.

Driving around campus in a normal V8 SUV wasn't enough for the owner, and he strapped a supercharger and went drag racing. The quarter-mile got him hooked in the wrong kind of car. Soon, a fully built LSX with custom internals went in, and it now gets extra motivation from a pair of Precision 76 millimeter turbochargers.

The best has not been strapped to a dyno yet, but it's believed that she puts out 1,200 to 1,400 horsepower. Even when fitted with for racing slicks, the beast still spins all four wheels endlessly. The interior has a few surprises as well, keeping all the factory leather and luxury gear while wrapping a protective roll cage all the way to the back.

Despite this factory-fresh setup, LSXcalade is a quarter-mile monster. Its best pass is 10.32 seconds at 135 miles per hour that comes right at the end of this 1320video clip. So it's about as fast as most supercars. You can keep your bought Trackhawk, thank you very much.

The owner hopes to eventually get it into the 9s, and there's no reason to believe he won't get there. A monster like this definitely sparks your imagination. Maybe one of those NOS-powered Nissan Patrols can fly over and give the young gun the rival he deserves. 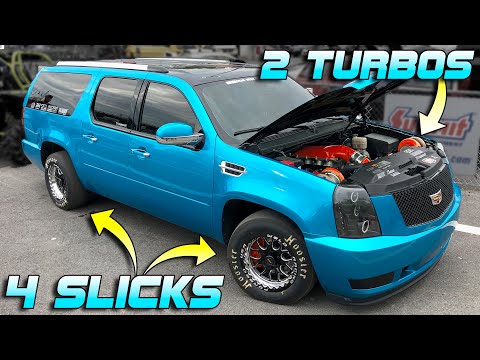