If you've ever browsed through a motorcycle group, you must have noticed people asking for advice on what they should buy as their first bike. Most often, someone will ask if it's ok to hop on a 600cc sports bike for starters. But now and then, some lunatic will ask if it's ok to start on a Hayabusa.
16 photos

For many years, the Suzuki Hayabusa has been a point of reference among motorcycle riders and enthusiasts. It enjoyed a cult following around the world. Its popularity can be compared to that of the Toyota Supra, but its sheer speed goes further beyond that point into the realm of supercars. Because the horsepower-to-weight ratio of a bike like the Hayabusa is enough to strike fear into the hearts of any challenger on four wheels.

But 16 years after its launch, the Hayabusa has been eclipsed by Kawasaki's new supercharged motorcycle: the Ninja H2R. It's not even street legal, but it has over 300 horsepower available at a twist of the wrist. And so, it quickly became one of the most fierce motorcycles on the market and a fan favorite on a global scale. Kawasaki only built a limited number of H2R bikes, so it's not that often that we get to see one in action.

And today we're about to get another sample of how fast the H2R is. Because it's going up against a highly-tuned Lamborghini Huracan. And that's because a standard Huracan wouldn't stand a chance against Kawasaki's crotch rocket. Now fitted with twin-turbos, this Italian supercar is rated for 1,100-horsepower and 737 lb-ft (1,000 Nm) of torque. It weighs 3,196 lbs (1,450 kg) but it does have AWD and a set of tires that can provide loads of grip.

The Ninja H2R is going to have a hard time going off the line, with 310 horsepower and 121 lb-ft (165 Nm) of torque. It only weighs around 661 lbs (300 kg) with the rider included, and it should reveal its true potential in the rolling race. For the first run, the Lambo is off to a ludicrous start, while the H2R is struggling to keep its front wheel down. With one wheel in the air, the Kawasaki is left behind with no chance of winning.

For the second run, the Ninja H2R is given the chance to launch just slightly before its opponent. Even with 1,100 horsepower at hand, the Lambo gets gapped, and the score is now tied. Back to the format from the first run, the Kawasaki once again wheelies its way into losing. The Lamborghini needed 9.4 seconds to cross the quarter-mile (402 meters) finish line, while the H2R was 0.5 seconds slower. An extended swingarm could have worked wonders for the motorcycle if you think of it.

But what happens if you take away the Lambo's AWD advantage? Starting in 1st gear, from about 30 mph (48 kph) is certainly going to even the odds. They're neck and neck for the first part, as the Kawasaki rider is struggling to keep the front wheel down. But as they get up to about 140 mph (220 kph), the H2R takes the lead and crosses the finish line in 1st place. For the next attempt, the starting point is set at 65 mph (104 kph), in third gear.

This is where the H2R reveals its full potential. It once again crosses the half-mile (804 meters) finish line in the lead, with speeds exceeding 180 mph (289 kph). Considering the gap, the Lamborghini would have probably needed an extra 400 or so horsepower to keep up. At this point, the score is 3-2 for the Kawasaki Ninja H2R. But they're about to get tied up once again, with the braking test being saved for last. 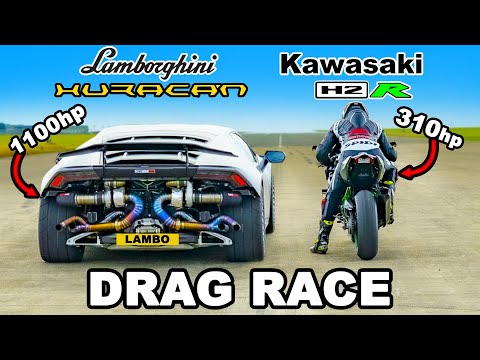