Already going through the oddly named LCI (Life Cycle Impulse) - a.k.a. a facelift - the F90 generation of the BMW M5 high-performance sedan has had plenty of time to prove its worth. And with its tried and tested attitude, the platform has demonstrated on many occasions an appetence for spectacular aftermarket builds.
15 photos

The Bavarian automaker would very much like to convince every BMW customer out there that its M5 and M5 Competition models need not be improved... unless it’s done so from the factory. Those who are unsatisfied with the latter’s 625 PS (617 hp) can either go down the M Performance Parts route or just wait a little more for the arrival of the 635 PS (626 hp) M5 CS.

Now, that’s the official take. The aftermarket scene, on the other hand, can stretch the architecture to much higher levels. We just saw Manhart release their new MH5 800 Black Edition, which actually sports 823 hp underneath the black hood.

Now it’s time to check out from a neat POV video the credentials of the GP Infinitas Hurricane 2 BMW M5, a prototype that’s allegedly taken to more than 1,000 PS (986 hp). Interestingly, although as far as we can tell from the social media presence of the company, this build is more inclined towards record attempts and tuning competitions, the video test embedded below is performed on public roads.

And, because it comes courtesy of the TopSpeedGermany channel on YouTube, we’re in for a very quick and speedy ride on those fabulous parts of the Autobahn that have no speed limits. Thus, we’re not surprised the orange and black tuning monster casually hits 312 kph (194 mph).

What we didn’t expect was the level of wind noise. Although the white-gloved driver cared to showcase a little bit of the exhaust noise (from the 1:08 mark) before taking off, the former became a little more dominant than its rumbling companion for this top speed run after surpassing the 300 kph (186 mph) threshold.

Who knows, maybe it was due to all those custom aero components working hard to keep the Hurricane 2 prototype glued to the German tarmac. 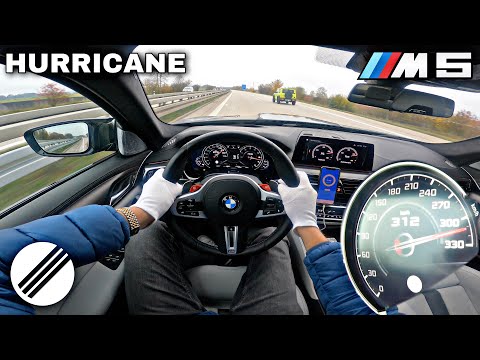