Dragos Chitulescu
You can't help but wonder how many more straight-line races Travis Pastrana is going to partake in over the next few weeks. This is the seventh episode already for the Gymkhana-spec STI, and he has been defeated only once, by Brooke Berini and her Nissan GT-R. This time, a slightly less powerful Supra was brought into play.
13 photos

So from the get-go, it sounds like Travis might have a chance at winning this. As you open the hood of the Supra it becomes obvious that a single-turbo conversion has been performed here. And the turbo is not a small one by any standards. Working at 40 PSI (2.75 Bar) of boost, this car is estimated to have around 1,000 horsepower or perhaps slightly more than that. And with that in mind, it makes perfect sense to have Mickey Thompson tires on the rear axle.

But even on paper, the Supra does lose to the STI on several levels. First of all, it's using a 6-speed manual transmission, whereas the STI is packing a 6-speed sequential. Also, there's a significant difference in terms of weight, as the Supra, which still has a functioning air conditioning system on it, is rated at 4,000 lbs (1,814 kg). That's almost 1,500 lbs (680 kg) heavier than its opponent.

And even though it comes with a bit more power, the big question is: Will it be able to use it all, considering it's an RWD vehicle? We've all seen how fast Travis can be, going off the line, so odds are that the Supra won't be able to keep up unless we're talking about a rolling race. As always, before the two cars line up, we get to see some predictions on behalf of the people watching the whole thing.

And opinions are split between the two cars, with some of them leaning towards a victory for the Supra in case of a rolling start. A quick warm-up reveals the fact that the owner of the Supra might have been downplaying the whole thing, and that he might be considerably faster than everyone thought initially. They line up for the 1,000 ft (304 meters) race, with a best out of three rule as usual.

For the first run, no contest here, the STI looks like it's trying to launch itself into orbit, while the Supra is struggling with traction issues. Even though the 2JZ hits boost later on in second gear, the gap is just too big, and Travis Pastrana wins the first run. On the second run, it's the moment everyone was waiting for. They take away the AWD advantage and opt for a rolling race instead.

This time they are neck and neck from the very first moment, but what seems strange is that towards the end of the runway there's a lot of smoke coming out of the Supra, and it seems to be spinning its tires even at that speed. Either way, we get to see one of the most amazing photo finishes in a while now, with the Subaru flying over the 1,000 ft (304 meters) marker, with the Toyota right by its side.

But ultimately, it's Travis Pastrana who is first across the line, and the winner of this challenge. But we are treated to a bonus round, just so that things will be settled once and forever. The Supra seems to be plagued with traction issues once again, and this time Pastrana creates a gap between the two cars, winning the race in a relatively comfortable position. 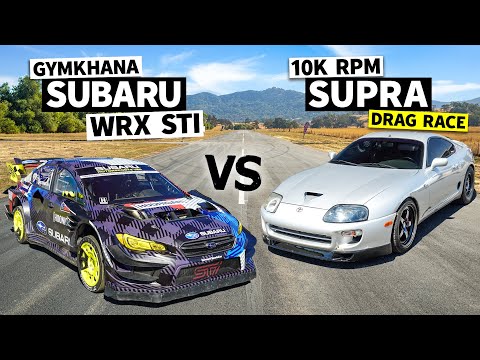