You’d never think that a 7,000-pound pickup truck could ever hold a candle to a Lamborghini supercar when it comes to acceleration, and yet this drag race between a modified Ram TRX and a stock Huracan EVO RWD came down to the wire.
6 photos

Sure, if it was anything but a straight line, the truck wouldn’t stand a chance, regardless of how much power it had. Still, output is one department where it’s clearly not lacking, thanks to a 6.2-liter supercharged HEMI V8 unit, the same one you’d find underneath the hood of a Dodge Hellcat (Charger/Challenger) or a Jeep Grand Cherokee Trackhawk.

Before it actually went into production, rumors varied regarding how much power the HEMI V8 would actually put down in the Ram TRX and everyone knew to expect some type of detuned rating. Thankfully, FCA only cut a handful of horses, allowing this full-size pickup to still put down a monster 702 hp (711 ps).

The Lamborghini Huracan meanwhile is a whole different animal. This EVO RWD spec was unveiled back in January of last year as a successor to the LP580-2 model. It also came with the carmaker’s P-TCS (Performance Traction Control System), meant to ensure that torque wouldn’t get cut off abruptly. Unfortunately, the engine was detuned to 602 hp (610 ps), making the EVO RWD slower to 60 mph than the standard Huracan EVO. Make no mistake, the Lambo would absolutely crush that TRX under normal circumstances.

Of course, these weren’t normal circumstances. This particular Ram TRX was tuned to produce 900 whp, or roughly 1,000 hp at the crank.

The two raced three times, with the truck messing up the launch on the third attempt. What’s fascinating though is that the TRX won the first two races – although not by a large margin. What an absolute beast of a truck. 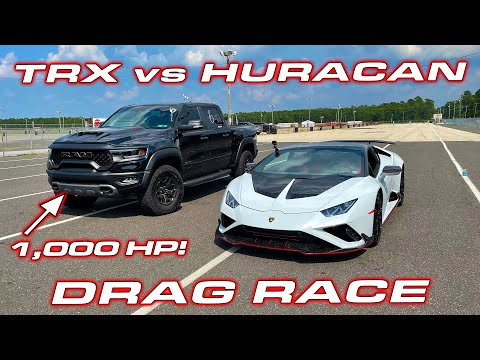