The builds we get to enjoy nowadays seem crazier than ever and it's worth noting there are plenty of aficionados who support domestic projects rather than going for the easiest paths involving brands from other parts of the world. And if we're talking about Russia, you can expect contraptions such as the 1,000 HP Kamaz that brought us here.
10 photos

This truck used to be a standard Kamaz, a workhorse many Russians are used to, but the piece of heavy machinery has been gifted with a Scania engine - yes, the said four-digit output can come from the factory in the hauling world.

Installing the Swedish motor was quite a challenge, as, for instance, the radiator had to be relocated, while the wiring was a quest in itself. Then the builders had to come up with the supporting mods, which weren't few.

Nevertheless, this six-wheeler can now brag about its thousand horsepower and put it to good use too. The quotes in the title are there since this isn't neccesarily a drift build - who knows, perhaps such projects will become a trend, so the notion of "drift truck" will include more than the pickups we get nowadays.

Even so, the 6x4 (the two rear axles deliver the power) toy can put on quite a sliding show, albeit when introduced to a stretch of wet asphalt - it wouldn't be all that surprising to see the vehicle going sideways in the dry, even though it probably wouldn't be able to sustain prolonged drifts.

In fact, you'll even get to see the Kamaz playing the tandem drifting game with a car.

Now, if the details mentioned above have you thinking about Russian vlogger AcademeG, you are right, as this is the aficionado behind the build.

Come to think of it, a Kamaz street truck with the muscle number of a factory Kamaz race truck (here's one engaged in a drift battle against a Lamborghini, at Goodwood) is a natural step forward for the said gear head.

After all, some of his previous builds involved a 600 hp ZIL truck, as well as the contraption the Internet knows as the Bentley UltraTank... 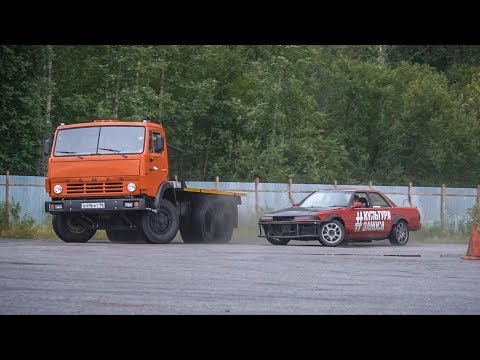