The DeLorean in the featured video may appear fully stock, but it most definitely isn’t a survivor. Sticky rubber shoes and Ferrari-sourced brakes open the list of modifications, along with the Porsche G97/01 transaxle.
17 photos

“That’s neat! Does it have a twin-turbo boxer from a Neunelfer as well?”

I’m afraid this DMC-12 is a little more humble. The powerplant comes from a Kia Stinger GT in the guise of a 3.3-liter V6 that’s been upgraded with a pair of boosty snails from Garrett Motion that currently make nine pounds per square inch of boost. A whopping 487 wheel horsepower, a custom throttle body that goes to the date Marty McFly traveled to the future, a badass exhaust system, Recaro seats, and a modified Lotus Esprit chassis round off this amazing build owned by Nick Reid from Reid Performance.

“You said whopping? 487 wheel horsepower isn’t a lot if you ask me.”

Compared to the crankshaft numbers a C8 Z51, it certainly isn’t. Be that as it may, this eclectic and eccentric build is the first DeLorean in the 11s on the quarter-mile. It also traps over 120 miles per hour (193 kilometers per hour), which is pretty damn fine even by mid-engine 'Vette standards.

The gullwing-doored sports car isn’t challenging the Corvette, though.

On the other side of the runway, the peeps at Hoonigan brought out a 1,060-WHP brute styled after the M12 Warthog in the Halo video game series. It flaunts a simply ridiculous 1,090 pound-feet (1,478 Nm) of torque from a Ford small-block V8, it spins 43-inch rubber boots, and the Atlas transfer case complements RockJock axles. It is, however, a bit heavy at 6,500 pounds (2,948 kilograms) versus the DeLorean’s 2,725 pounds (1,236 kilograms).

I’m not going to spoil which is quicker over the 500-foot sprint because the featured clip is definitely worth enjoying without skipping a single second. 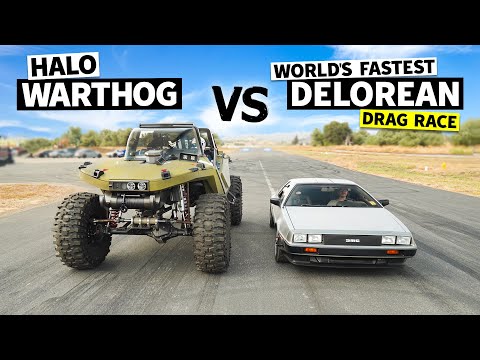