Cute Dog Does Yoga to Stretch in Citroen C3 Commercial

Call me Grinch and throw me in a tank of eggnog, but there’s a time when you get sick from seeing miniature Santas, reindeers, tiny lights and fake presents and beards all over the place... a month before Christmas! You just snap from all this sweet nothings the industry love using to scrape more money and just want to get in some sort of mean oil spilling machine and defile every single fluffy thing out there.
1 photo
If that’s gonna happen, this is my weapon of choice for sure - a 1,000 hp diesel rat rod #nofilter. No seriously, there’s nothing between those oil burning cylinders and the tip of the exhaust.

And if you look closer, you’ll recognize this rat rod from the already famous “F**K YOU AND YOUR PRIUS” photo that broke the Internet... well at least for petrolheads.

The rat rod actually showed up at SEMA this year and 1320video did a little coverage there, showing some of its features. The low-slung sedan was built by Welderup, a shop featured on Discovery Channel’s Vegas Hotrods TV show.

The chopped 1928 Dodge is now powered by a turbocharged Cummins diesel engine and puts down over 1,000 hp and up to 2,000 lb-ft (2,700 Nm) of torque. Basically, you can pull a house and two boats, but if you unleash it on smooth asphalt it does the best two-toned burnouts you’ll ever see.

As a bonus, there's also a Ford truck built by the same guys in the same manner, so go check them out below. 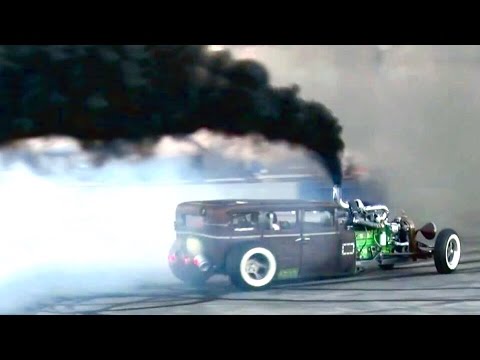