Don't take this the wrong way, but your opinion (as well as everybody else's) on the aesthetics of the Jaguar XJ Series 1 is completely irrelevant. Like other Jaguar models of the era, the late 1960's limousine is a gorgeous piece of automotive design and a great reinterpretation of the Mark X, the brand's top dog at the time.
11 photos

Despite its looks, the Series 1 isn't one of those cars you come across too often, particularly in the States. And when you do, chances are the car will be either in the shape of its life or in desperate need of a makeover. One thing is for certain: it won't be looking anything like this 1970s XJ Series 1.

The owner says it's hard to call it a Jaguar anymore, seeing as how pretty much anything other than its body comes from a Chevrolet or some independent parts manufacturer. And after we go over the modifications the XJ went through, you will probably agree.

Let's start with the thing that matters the most: the engine. It's a Chevy 540 big-block V8 developing an intriguingly round figure of 1,000 horsepower. But even if that's not entirely accurate, you can be sure the monster 8.8-liter unit pumps out a lot of power.

And that's even before the nitrous kicks in. Probably sick of getting hassled at the traffic lights by people who think anything that doesn't look like a muscle car can't be fast, the owner keeps a 300 shot ready at all times. Not that he should need it that often with that big block under the modified hood, but it must be good to know it's there when you need it.

Back to the Chevrolet connection, you can add the rear suspension as well as the 200-4R four-speed automatic to the list opened by the engine, so this thing is indeed as much Chevy (if not more) as it is Jaguar. It does have Jaguar XJ12 leather seats to go with the very clean custom-made interior. It definitely looks a lot better inside than you would expect.

Especially if you consider how fast this Chevguar goes. According to the very enthusiastic owner, the car's best quarter-mile time so far is a very respectable 9.85 seconds at 140 mph (225 kph). And, after watching him giving it the beans a few times on the street, the only reason we might have to doubt that is seeing how hard it is to keep it straight. Other than that, there's little to no tire spinning and massive amounts of power, which is exactly what you're looking for in a drag racer.

However, calling this Jaguar a drag racer doesn't do it justice as it's just as well equipped to drive on the road. It won't get great mileage—nothing with a 540 big block will—but it looks comfortable thanks to adjustable shocks and those leather seats. Besides, a long trip only means more time to enjoy the V8's sublime rumble. And the chance to make more people chuckle at the sight of the license plate. 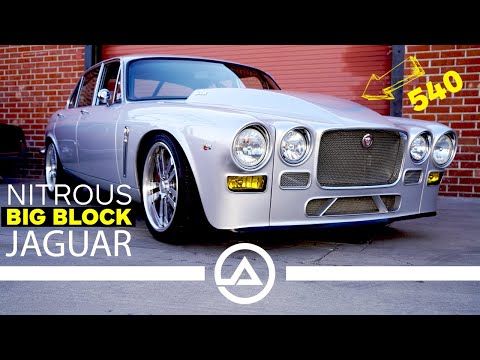