2 Crazy Trans Am vs. New Edge Mustang Drag Race Is a Tale of Torque and Wheelies

Home > News > Auto Motorsport
Dragos Chitulescu
About a year ago, a friend of mine gave me the keys to his 460-horsepower Seat Leon Cupra ST. Going up to over 124 mph (200 kph) is easy when you're running that kind of power. But somehow, I was not touched by the experience. Nostalgia aside, it was easy to drive, fast, and according to my buddy, quite reliable.
13 photos

There's just something about fast wagons that manages to pique my interest. There are plenty of choices on the market if you're looking for one: Audis, Subarus, Nissans, you name it! Not all of them are as cool on the outside as they are on the inside but to each his own. Today we're looking at two quite fast AWD wagons: a German one and a Japanese one. While the Golf R is a bit of a sleeper, the WRX STI Wagon looks like a real street racer.

I've always thought these STIs to be fascinating, although I would much rather have the sedan version instead. You can get these for relatively cheap, and aside from reliability issues, I imagine that they're a lot of fun. Meanwhile, looking at the Golf R Estate, it looks like the Leon Cupra's boring sibling. I think that the only reason it makes sense to choose the Golf R is the fact that it's AWD.

Before getting into today's challenge, let's look at what makes these two cars particularly special. They're both rated for about 500 horsepower. But the Subaru is running a PPG straight-cut 5-speed gearbox, while the Golf R has a more modern 7-speed dual-clutch one. The STI weighs in at 2,535 lbs (1,150 kg). The Golf R is considerably heavier, even though it has a stripped interior: 3,306 lbs (1,500 kg) in total!

Mathematically speaking, it looks like the STI should have no difficulties in dominating this challenge. But let's not get ahead of ourselves here. Both cars will have their 0 to 60 mph (96 kph) time recorded for the first test. A quick pre-race soundcheck reveals what anyone could have guessed from the beginning: the boxer engine sounds amazing! With flat-foot shifting on its side, the Subaru needs 3.16 seconds to get up to speed.

The heavier Volkswagen manages to outperform its opponent, with a time of 2.97 seconds. Is it all down to the gearbox? Is it all over for the Subaru? The quarter-mile (402 meters) test is up next. The cars will be doing solo runs down the track, ahead of the main race. The WRX STI Wagon storms across the finish line in 11.38 seconds, with a trap speed of 125 mph (201 kph)!

The Golf R is just slightly slower, finishing the quarter-mile test in 11.50 seconds, with a trap speed of 122 mph (196 kph). With such a small difference between the two cars, anything can still happen in the main race. However, the WRX STI is off to a much better start, and it looks like the Golf R isn't working at 100% potential. The Japanese wagon takes the win, but its opponent asks for a re-run.

This time around feels like watching a completely different movie. The Golf R takes the lead and wins the quarter-mile race, hands down. After addressing a mechanical issue, the Subaru lines up for the third run. This is the closest one yet, and Volkswagen just barely takes the win. The roll race is the last part of the challenge. The weight advantage comes into play, and the Subaru gets its revenge. 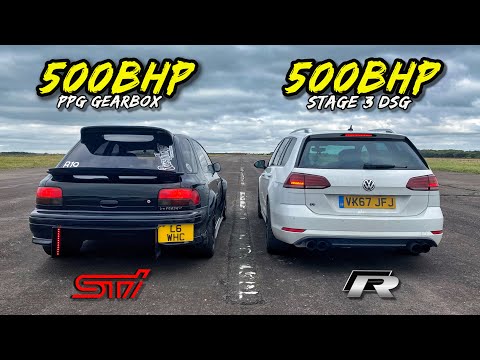