4 Ford Mustang and Jeep SRT8 Seek America vs. Import Glory, It's Not a Close Call

5 BMW 420i Gets Murdered by Audi A5: Drag Race of German Coupes With Under 200 HP
Car video reviews:
Up Next

People probably never asked for a station wagon with supercar performance levels, but that didn't stop Audi from making one. And they still say the Germans don't have a sense of humor.
6 photos

In stock form, the RS6 Avant produces 600 metric horsepower and a staggering 590 lb-ft (800 Nm) of torque, all channeled through an eight-speed dual-clutch transmission sending power to all four wheels via the proprietary quattro all-wheel-drive system.

For most people, that should be more than enough, especially when you consider the rest of the package. We're talking about five full seats and a huge trunk that, ironically enough, makes the RS6 quite useful for a family with up to three kids. Three kids and two very cool parents.

In terms of actual performance, we're looking at a typically German electronically limited top speed of 155 mph (250 km/h) and a 0-62 mph (0-100 km/h) sprint of 3.6 seconds. If it weren't for Tesla's Model S Performance, these numbers would have probably topped the list of family-friendly cars, but a close second place is still perfectly honorable.

However impressive the numbers are, though, they're far from the actual full potential of the 4.0-liter twin-turbo V8 engine. As it turns out, despite having half its engine, the Audi RS6 Avant can be pushed to match the performance of the original Bugatti Veyron, and that's without messing with the engine block at all.

The guys over at MTM managed to get over 1,000 hp and 922 lb-ft (1,250 Nm) - the exact specifications of the first modern Bug - by upgrading to larger turbochargers, installing an open-air filter, using a larger air intake, replacing the exhaust system, and, of course, remapping the engine's ECU.

The result is simply breathtaking, especially if you happen to love the new RS6's exterior design - which we do. The 0-62 mph sprint now takes 2.8 seconds, whereas the top speed... well, it's still limited, but not electronically limited. As it turns out, the only two things holding it back right now are the tire specifications and the risks of doing 220 mph (354 km/h) on open roads, even if we're talking about an unrestricted segment of the Autobahn. 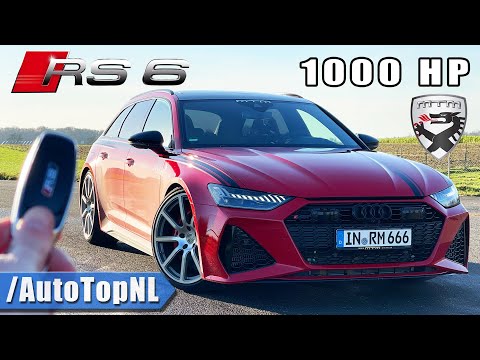