The MT 500 was never sold as a racer, but two machines were built for Stanley Woods and Ted Mellors.

They were made &#8203;&#8203;late in 1938 and looked similar to the Mk VIII but had a swingarm rear suspension. The frame was modified slightly to the raise the engine. The bore and stroke of 81 mm and 96 corresponded to that of the 500 cc MSS. 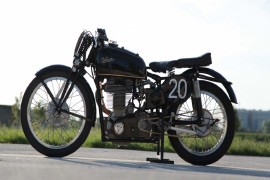