The Velocette company had just began producing their 1940 civilian MAC model when wartime production requirements forced them to switch to the production of high-precision parts for military contracts. In addition, they were contracted to paint helmets for the British Army. 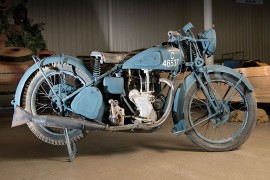