The MAC was born in 1933, the first version having an engine with a displacement of 350cc and a top speed of 75mph.

The MAC had a weight of 280lb and a 4-speed gearbox. In 1940, Velocette released the military versions of the MAC along with other models, MDD and MAF, made for the war effort. In 1948, MAC had 14HP and a weight of 320lbs. The bike suffered changes over the years, in 1953 it got adjustable rear suspension, a swinging arm and a suitably sprung frame, the wheelbase grew to nearly 54 in in and the seat height rose to 30 in. MAC's production ceased in 1960. 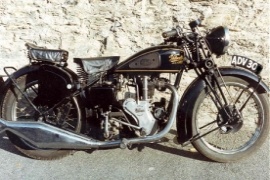