The Velocette LE was a motorcycle made by Velocette from 1948 to 1970.

The designation LE stood for "little engine". Used by over fifty British Police forces, the police riders became known as "Noddies" because they were required to nod to senior officers, and the LE was nicknamed "the Noddy Bike". Production ended in 1970 when the company ran into financial problems and went into voluntary liquidation. 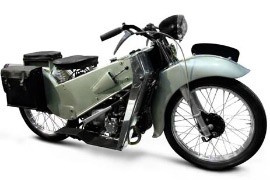