The production of the K line of bikes began in 1925, also being the platform for the KSS, KTS, KTP and KNN roadsters, which were in production until 1948.

The K model had a new, modern engine with an overhead camshaft. The frame is flat the engine as a load-bearing part, a parallelogram plug with friction silencers and no rear suspension. The transmission is a three-speed manual. Also in 1925, the KT model appeared and had shields to protect the legs of the element rider. Both models came out of production in 1927. 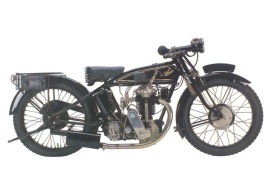