The 2006 MY Ural Patrol comes equipped with an air-cooled, four-stroke, 749cc, boxer twin cylinder powerplant paired to a four-speed manual transmission with a reverse gear and can produce a claimed 40 horsepower and 52 Nm of torque.

This sidecar can tackle unpaved roads as well, thanks to a 2WD system, making it a favorite among more adventurous Ural fans. It also comes with features such as a spare wheel with a large luggage rack mounted atop it, a spacious trunk, a sidecar windscreen, engine and sidecar guards, laced wheels and a high-end suspension package with a leading link fork with dual shocks, a sidecar shock absorber and dual shocks in the rear. 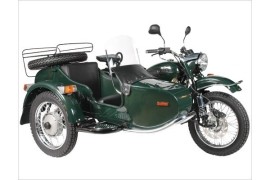 3 Ural Gear Up Sahara Limited Edition Is Back