The 2011 Sprint St is in fact identical with the GT version, only that it retains its three-exit underseat exhaust and lacks luggage.

Sportier than the GT, updates of the ST include new reflector-style triple headlight unit, re-designed cockpit, the same 1050cc inline triple engine, but with latest spec ECU for ultra-smooth throttle response. After 2014 the GT was no longer available outside the UK , but as of 2017, the Triumph Sprint GT SE is still in production for the home Market. 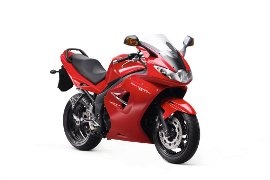