The 1996 MY Triumph Sprint 900 follows the Hinckley modular design, meaning it shares its engine and chassis with other models, such as the Trident 900 and the Daytona 900.

But that is where the similarities end. The bodywork still allows the engine to seen in its full splendour, whereas the Brits added half-fairings to not only increase rider comfort, but also performance, the bike being more aerodynamic than the naked Trident. One might even call it a touring bike but that is not the case either, because of the engine, which was tweaked for sportbike-like performance, it feeling most comfortable in the high revs. Add to this the light weight of the bike, as opposed to the full-fledged tourer, the Daytona 900 and you get an all-round motorcycle and one of the most sought-over machines from Triumph. 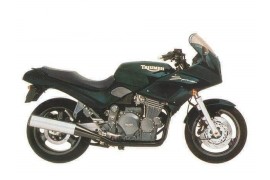