The motorcycle's official model designation is the T140V, but only dealers, parts men, and others who work within the bike's distribution network view it clinically enough to call it by that name. To everyone else, it's a 750 Bonneville. The Bonneville is, for alintents and purposes, the same basic motorcycle it has been for years. Originally a 650 that utilized a separately-housed four-speed gearbox, the engine design dates back to 1950. 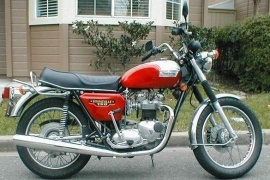