It's hard to find a Bonnie with more retro looks than the 1960 Anniversary Edition, regarded as the first bike in the series which defined the new styling direction, the 1960 machine was shown in a two-tone livery with a sweet combination of Meriden and Caspian Blue.

This machine quickly become the icon of a new generation of motorcycles and THE British bike. 600 1960 Anniversary Edition bikes have been manufactured, each sold with numbering and a certificate of authenticity. 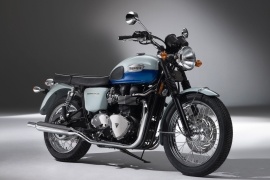