The V-Strom 1050DE is a newly developed adventure motorcycle announced by Suzuki, and made for overseas markets, primarily Europe and North America.

The model shares the same 1037cc V-twin engine with the V-Strom 1050, but also with the older models made between 2013 and 2019. The bike maker just had to modify the engine to be compliant with the EURO 5 emission standard. To improve efficiency and durability, Suzuki introduced for the first time on a motorcycle new hollow sodium-filled exhaust valves, to lower the temperature in the combustion chamber.

Compared to the V-Strom 1050, the DE version comes with a lot more features, one of which is the G (Gravel) mode in the traction control system, and ABS that can be turned off for the rear brake. These two features were specially engineered for comfortable and stable riding over a variety of road surfaces.

In addition to the V-Strom 1050, the 1050DE comes with wire-spoked wheels, a 3-position adjustable windscreen (tools required), an accessory bar, and a center stand. It also has a longer swingarm that increases the ground clearance by 25.4 mm (one inch). The handlebar is wider and made from a softer grade of aluminum that improves control and shock absorption. The cruise control feature remains unchanged and reduces fatigue when riding long distances without operating the throttle. 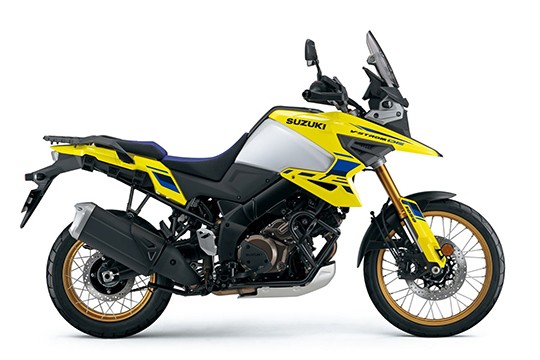