The 2008 Suzuki KingQuad 400 AS Anniversary Edition brings a fully-loaded machine to the off-road game, sturdy front bumper and heavy-duty winch included, retaining the classic KingQuad styling and the acclaimed performance specs and terrainability.

The manual gearbox is mated to a solid v-belt QuadMatic automatic transmission for precise shifting and a great feeling of being in control.

With selectable 2WD/4WD, the 2008 Suzuki KingQuad 400 AS Anniversary Edition can tackle rough and slippery terrain with ease, as its middleweight engine is anything but tamed and lazy. Add in the torque-sensitive front differential, independent front suspension and oil-damped rear shocks for the swingarm, for even better ground copying. For even more convenience, this quad comes with sturdy steel racks which can accommodate a lot of luggage and tools, camping gear and beer crates included. 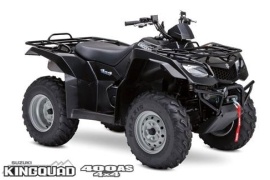 4 Suzuki Hayabusa Turns Into a Great Beginner Bike, Is Only Good for Laughs and Giggles