Relatively roomy seat, tiny nose fairing and a digital gear indicator on later model Suzuki GS 125E`s are the main highlights, on what is otherwise a basic, no-frills mode of transport. The Suzuki GS 125E does have a centrestand however, which some 125cc custom/commuters lack. 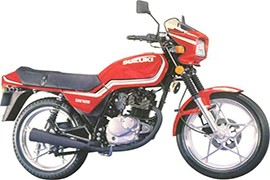