The 2015 MY Piaggio Typhoon 125 has been designed to fit the needs of Typhoon fans that want more performance out of their two-wheeler.

It has a modern, aggressive design, as well as an urban graphic scheme, which is sure to appeal to the more young among Piaggio fans. At its heart lies an air-cooled, four-stroke, 124cc, single cylinder lump mated to a continuously variable transmission, and can produce 8 Nm of torque. In addition, it comes standard with lightweight, alloy wheels, instead of the traditional steel ones, which not only make for a more agile machine, but also a more stable one. 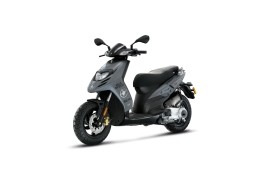