The new Norton Dominator SS is a naked bike, sold from year 2013.

This model it is equiped with a Twin, four-stroke motor. Today we have revealed first pictures of the all new Dominator SS. A fully homologated road going bike developed out of the hugely successful Domiracer. The Dominator SS will be privately previewed at an exclusive evening to be held at Donington Hall at the end of January 2015. 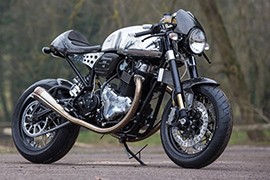