The 2015 Turismo Veloce stands out immediately as an MV Agusta, despite the fact that it expresses a stylistic concept which is uncommon for the brand from Schiranna.

The overall compact sensation provided by the size of the three-cylinder engine, further reduced by the hydraulic clutch control, is expressed in extremely well balanced volumes on the two axles, even with the side panniers mounted. This accessory was actually the cornerstone of the Turismo Veloce's overall design on which a slim, sleek and exclusive bike was built, but also functional and innovative. With a 30 litre capacity each, they integrate perfectly and smoothly with thebike thanks to a special saddle mounting frame on the two sides with builtin passenger hand grips.
mong the new features are the hydraulic timing chain tensioner, common to all the MY2015 three-cylinder engines as well as, like on the Stradale, the hydraulically controlled clutch. However, unlike the Stradale, the Turismo Veloce also boasts the mechanical slipper clutch. All of these evolutions allowed service intervals to be increased, now going from 6000 to 15000 km. Spark plug changes and valve adjustment has even gone to 30000 km. Both the battery and the alternator are more powerful, going from 350 to 450W. The exhaust system is also brand new, with a 400 cell catalytic converter. 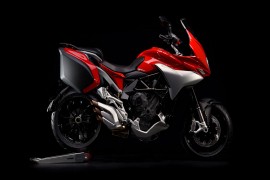