The 2014 MY V7 Special is a modern-day tribute to its first ancestor, the 1974 V750. Every element and even the paint scheme have been inspired from the original machine, without disregarding all the perks that come with modern day technology. This awesome two-wheeler is suitable for the more old-school among Moto Guzzi fans, but also addresses younger and novice riders who have a taste for classic machines.

it sports an air-cooled, four-stroke, 744cc, 90-degree V-twin powerhouse paired to a five-speed manual transmission, that can produce 50 horsepower and 58 Nm of torque. Unlike its previous embodiment, the House of Mandello del Lario have decided to give the 2014 MY a more aggressive overall appearance, replacing most of its chrome plating with a black finish. 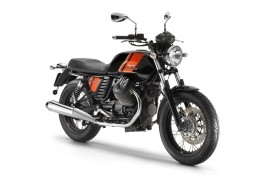