After the warm welcome the Clubman Racer version of the 2009 V7 received, it was only natural to see this retro racing machine evolving. So here's the 2010 V7 Racer, a bike which oozes classic Moto Guzzi allure and sports the same modern approach t the tech side.

This may not be exactly the old V7 Sport, but it's as close to it as it gets. And with all the sweetness coming right out the factory's doors, you can expect a thrilling feel once aboard this bike. Alongside the plethora of custom-grade parts and accessories the V7 Racer also comes with high-performance fuel injection, electronic ignition and pretty much all the modern tech Guzzi has in store. 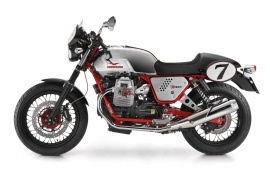