The new Stornello stands out with its numerous prestigious Italian made parts and the dedicated selection of colour schemes which enhance its charm and elegance.

Available in a limited and numbered edition, the Moto Guzzi V7 II Stornello is the latest representative of Moto Guzzi's exclusive ability to create truly factory specials, with a singular attention to quality and painstaking attention to detail. Like a collector's item.

One of the winning characteristics of the V7 has always been the perfect balance between maintaining the typically Moto Guzzi stylistic values with the needs of a modern bike. A dialogue that remains intact on the V7 II Stornello as well. Just like the white/red Stornello 125 Scrambler version in 1972, the colour combination on the V7 II Stornello also plays a key role. Then, like today, the contrast created between the pastel white of the tank and the racing red of the frame, both in glossy finish, manages to strongly characterise the design, as well as enhancing the mechanics of the transversal 90° V twin engine strictly in matte black. The intense red of the frame is clearly revisited both on the tank, trimmed with a typical horizontal stripe in the same colour, with the Eagle from Mandello depicted in it, as well as on the new metallic tubular license plate bracket that uses the already refined V7 II light cluster. The laser inscribed number on the aluminium tag located on the upper part of the headstock identifies the unit number, highlighting its exclusivity 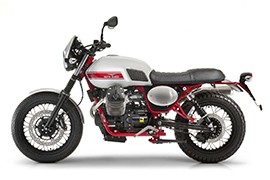