As all the other machines in the V7 series, the 2015 MY Moto Guzzi V7 II Racer comes with a new, closed-ratio gearbox and a new clutch, with an added 6th gear, which allows a more relaxed highway speed, as well as a higher rev limit. In addition, a lower center of gravity has been achieved by lowering its engine, which means that this new generation of V7 machines offer more stability and improved maneuverability. Technology-wise, it is one of the machines in its class that comes standard with ABS and traction control.

And, as its previous embodiments, the V7 II Racer has the most aggressive designs among its siblings, with a racing red frame, and chromed accents that accentuate the bold and aggressive overall design of this pure Italian racing machine. 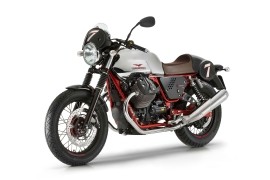