When it comes to versatility, few can match the 2014 MY Moto Guzzi Stelvio NTX. It has a an authentic and aggressive overall design, but is also capable of just about anything you would expect from an adventure machine. Wire-spoked wheels, hard, lockable side panniers, a windscreen, engine guards and mudguards, a two-up seat, a generous, 32 liter fuel tank, as well as the latest technologies developed by Mandello del Lario all come as standard, which ensure this machine can cross any continent in just one ride, given the rider somehow loses the need for sleep.

In the engine department, it comes with the dependable, air-cooled, four-stroke, 1151cc, 90-degree V-twin found on its predecessors, which can produce an impressive 105 horsepower and 113 Nm of torque. 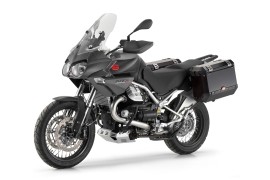