The House of Mandello del Lario has launched the 1981 MY Moto Guzzi 850 T 3 California as a direct competitor on the American market for the Harley Davidson Electra Glide FH80.

At its heart lies an air-cooled, four-stroke, 844cc, V-twin powerplant paired to a five-speed manual transmission, and can produce 68 horsepower at 7000 rpm. It has a classic, American cruiser overall look, with lots of chrome embellishments on the exhaust, fork and engine accents. 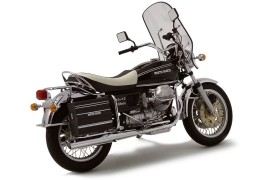